In the southeast corner of Wyoming sits the quaint little town of Saratoga boasting blue-ribbon fishing, championship hunting, natural hot springs, incredible golf, historic lodging and stunning vistas. Within the town, I stumbled upon the historic Saratoga Inn (later named Saratoga Resort and Spa) which has undergone a bounty of changes over the last century. Most recently, a once retired brewery has been given new life in the form of the Snowy Mountain Brewery within the confines of the Inn. 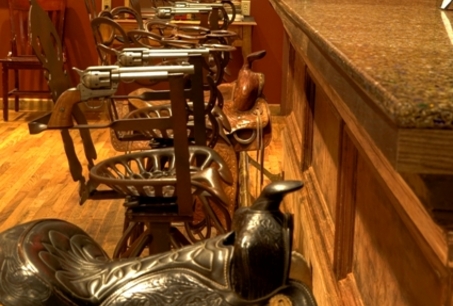 When I first entered this hamlet, a stroll down Bridge Street gave me the impression of days gone by with the historic Wolf Hotel dominating the southeast corner of the block and Lollipop’s old-time café sitting next door. The authentic Lazy River Cantina is directly across the street along with The Rustic Bar which completes the western scene with its swinging saloon doors. Across the North Platte River lies the Saratoga Inn and Snowy Mountain Brewery.

Sitting at the Inn’s Snowy Mountain Bar, hints of the Old West again entered my psyche with bar stools clad with six-shooter arm rests and prize moose and bison mounts adorning the walls. Within this setting, it was easy to imagine a corner poker game or piano man silhouetted in cigar smoke. Sipping an Irish Red Ale, I struck up a conversation with the brewmaster, Steve Simpson.

Simpson told me his beer roots run deep. “My great grandma Hall brewed beer to pay her bills after emigrating from Ireland,” he stated. “My grandfather Earle also brewed hard cider as I grew up in the small town of Cayuga in upstate New York. Later, I was stationed in Germany spending three years near a monastery where the monks brewed fantastic beers. I absolutely loved the smell from the brewery as well as the taste of their labors. From then on I was hooked.”

After getting the Library Brewery in Laramie back on its feet in 2008, Simpson heard of the need for a brewer to resurrect the defunct Sierra Madre Brewing at the Saratoga Inn. Simpson has been brewing at the renamed Snowy Mountain Brewery since July 2009, and has retooled the brewery and has things running at full steam.

In this small Wyoming town that seems to have everything one could desire, Simpson and the Saratoga Inn have successfully rekindled an iconic aspect of the community that had long been dormant. “I am very lucky that the owner and management are as excited as I am in the brewing of great beer and growing the Snowy Mountain Brewery,” Simpson stated. After finishing off my fifth pint of Snowy Mountain beer, I would have to agree with him.