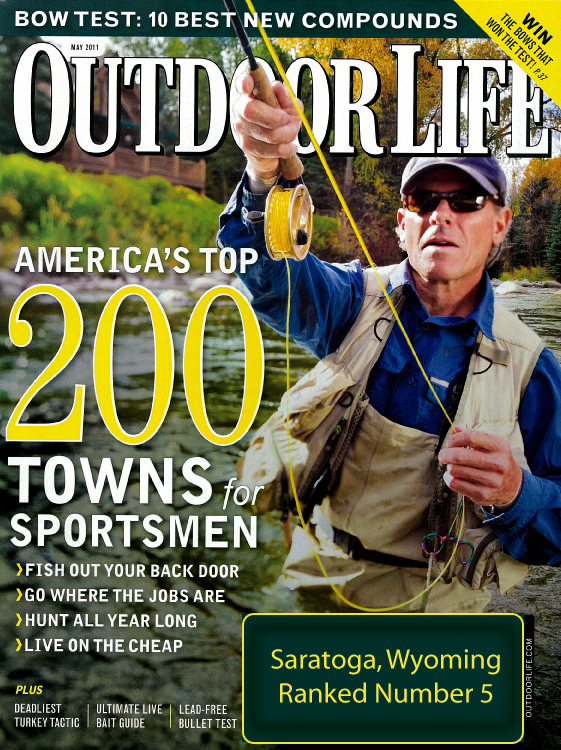 Outdoor Life Magazine named Saratoga, WY one of America’s Top 200 Towns for Sportsmen.  What is even more impressive?  We came in at number 5!!  Each year the magazine ranks towns for fishable species, huntable species, gun friendliness, etc.  This year it also calculated population growth, income, home values, and cost of living to determine the winner.

“When we started our “Top 200 Towns for Sportsmen” program in 2008, our goal was to provide you with an exhaustive list of cities and towns that, in addition to having excellent and abundant hunting and fishing opportunities nearby, are also great places to raise a family and provide a high quality of life.  That same mission continues today.” -Outdoor Life Magazine

Saratoga is a town in Carbon County, Wyoming, United States. The population was 1,736 at the 2000 census.

Saratoga is the home of the Steinley Cup microbrew competition, held every August at Veterans Island Park, a playground and picnic facility located on a small island in the North Platte River. There is also a public pool heated by a hot spring located in Saratoga. Saratoga is one of many western communities economically devastated by consolidation, automation and the changing business practices of multinational timber companies. The town’s largest private employer, its sawmill, closed in 2003. The town’s two largest employers now are the United States Forest Service and Carbon County School District No. 2, both public sector employers. The town’s motto is, “Where The Trout Leap In Main Street.” The local newspaper is the Saratoga Sun.[3] -wikipedia.com

The population growth of Saratoga, WY is up 3% from 2000.  The cost of living index is 80.7 but the median household income is $56,740 which is higher than the states median household income.  The median value of homes and condos in Saratoga is $146,389 which is up from calculated numbers in 2000 of $85,500. Outdoor Life Magazine used this info, provided by city-data.com, to determine its ranking as number 5 when they evaluated over 200 towns in America.

Saratoga is a sportsman’s paradise offering anglers a true blue ribbon trout fishing experience in the nearby North Platte River. There is also access to big game hunting of all kinds in the  nearby mountains and plains. Local guides and outfitters are happy to show their favorite places to “bag a big one”. Saratoga is host to many events throughout the year. The Ice Fishing Derby held at Saratoga Lake draws anglers from all around. Also there are rodeos, brew festivals, chili cook-offs, outdoor concerts, art festivals, and even chariot races each year, here in Saratoga. Contact the Saratoga Platte Valley Chamber of Commerce for specific information when visiting The Good Times Valley. -wyomingcarboncounty.com

Saratoga, WY is a great place to live, work, and play!  Whether you live here or want to visit here to find out what all the hype is about — Saratoga Resort allows you the opportunity to see all of the hunting and fishing Wyoming has to offer.  Please contact us today for lodging specials and information, golf memeberships and VIP memberships to our resort!