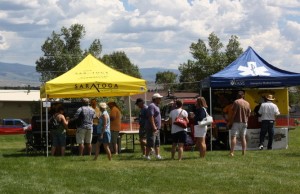 After the brewfest ended, competitors and beer enthusiasts stopped by the Snowy Mtn. Pub & Brewery for a great Mexican buffet, entertainment and a tour of the brewery. View the photo gallery below for pictures from the event.

On Saturday, September 24th we will have a Mustache Bash Fundraiser starting at 8pm. Guys & Gals are asked to show off their best mustaches for a chance to win some great prizes. Donations will be taken at the door to raise money for “Lights On” the Saratoga High School football field, in memory of Mitchell Birch.

Football is in full swing! Stop by to watch the big game on one of our 5 HDTV’s. Nothing goes better with football than an ice cold beer.