History of the Growler

How a brewery in Wyoming started the modern trend… 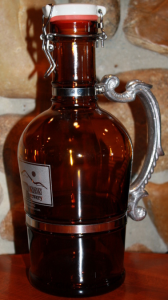 Today nearly every brewpub is happy to sell you a growler, a half-gallon glass container filled with their ales and lagers. Essentially a growler is a glorified bucket, an upscale pail. In fact, long before beer was dispensed in cans there were growlers.

Over one hundred years ago a growler looked like a galvanized pail with a lid on it. People hauled it from the pub to home to enjoy fresh beer at their leisure or at work (yes, on the job beer drinking preceded the two martini lunch). History however is a bit unclear on just how this container became known as a growler. Perhaps it growled when the carbon dioxide escaped; maybe it was the rumble from the workman’s hungry stomach at lunch just before the container was opened. Whatever it was, the name stuck. Before World War II, kids used to lug these covered buckets of beer to workers at lunch and to their parents at the end of the day. They called their task “rushing the growler”.

The galvanized metal growler gave way to waxed cardboard containers by the 1950’s. The cardboard did eventually soak through but anyone who waited that long to drink their beer probably wouldn’t have bought it in the first place. Just as the cardboard container sales began to soar many states began allowing liquor sales on Sundays prompting people to simply go to the bar for a fresh pint than drink from a container at home. Fresh draft beer beat container stored draft beer every time. Then in the late 1980’s a small brewpub in Wilson, Wyoming run by the Otto brothers decided to put their beer in glass vessels that looked a lot like moonshine jugs. They put their logo on the bottle and the rest was soon to be beer history.

To purchase your Snowy Mountain Brewery growler visit our online store or pick one up at Saratoga Resort today!