L•O PROFILE, the elite Lake of the Ozarks Magazine, showcased our very own Saratoga Resort & Spa in the March/April 2012 issue. Below you can find the article in which we are featured.

The property and the surrounding area boast a long and continuous genuine Western heritage. The site originally chosen for the hotel was formerly the Hugus and Chatterton Log Store, built in 1870. The town in which it was located was aptly named Warm Springs. But with the completion of the Saratoga Springs Hotel in 1884, the town was renamed Saratoga, in hopes of creating a smaller version of the famed New York hot springs hotel.

In the construction of the original Saratoga Springs Hotel, owners William H. Cadwell and Judge M.E. Hooker used only the finest materials and craftsmanship. Early visitors flocked here to experience the luxurious amenities and attentive service, as well as the widely known therapeutic benefits of the natural hot mineral springs. Guests traveled from as far as the eastern United States and Europe to experience the springs and the excellent hunting opportunities in the surrounding areas. After several prosperous and successful years, sadly, the original hotel burned and was completely destroyed in April, 1906.

Following the destruction of the hotel, the state of Wyoming built the State Bath House, a state-operated facility that offered visitors a chance to indulge in the hot mineral baths for a daily fee. In the summer of 1949, new owner Bill Walker completed construction of the Saratoga Springs Inn on the site.

Walker is quoted as saying, “This place has everything: hot springs to heal almost anything that ails you, fishing, hunting, duck and pheasant shooting, one of the most colorful cow towns anywhere, red desert, timber and mountain country all in one!” In the spring of 1994, a massive renovation was undertaken to restore the hotel to its original glory and splendor.

Today, the Saratoga Resort & Spa is owned by Dr. Michael Janssen and is known as a nature lover’s and sportsman’s paradise. With 50 luxuriously appointed guestrooms and suites, the resort’s natural hot springs still draw visitors from around the world to its healing waters. The springs consist of five on-property pools, including one large pool. All are naturally heated from the geothermic action lying deep within the Earth below Saratoga and the surrounding region.

“The Native Americans who inhabited the region called these waters healing waters for their medicinal and therapeutic properties,” says Susan Wallace, the resort’s general manager. Many who visit the resort regularly for the hot springs will heartily agree.

But Saratoga offers much more than just healing waters. For those who enjoy the beauty and tranquility of outdoor activities, the resort is a true sportsman’s paradise. For fishermen there are plenty of fly-fishing opportunities in the surrounding streams and rivers with chunky rainbow, cutthroat and brown trout swimming in the cold mountain waters. Don’t know how to fly fish and always wanted to learn? The hotel’s staff is ready and eager to introduce you to this unique  challenge. Also, there are private fishing ponds on the resort’s grounds for those who prefer to stay closer to the warm, healing waters.

Hunters can arrange trips year-round through the resort’s concierge service. And whether one prefers to explore the surrounding trails by horseback or ATV, Saratoga provides everything needed for a day surveying the wilderness. 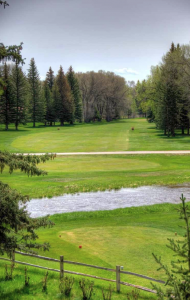 For the golfer, there’s a scenic nine-hole golf course at the resort. Your drive off the first tee comes from the top of a rock looking down along the tree-lined fairway and green. Try not to be distracted by the scenery and keep your head down during your swing!

Saratoga also is well-known as a year-round luxury resort destination. The onset of winter brings blankets of glimmering snow, beckoning those who enjoy snowmobiling in one of the world’s most beautiful winter landscapes. And again, the resort can provide the snowmobiles, helmets, guides and even instruction for a day in the snow. In addition to the roar of snowmobiles, quieter pursuits such as cross-country skiing and snowshoeing are available.

Back at the resort, fireplaces and warm furnishings — including Pendleton blankets and featherbeds — in the guestrooms are sure to keep visitors snug and warm during the winter months. And of course, the warm waters of the hot springs against the snowy backdrop is an experience that should not be missed!

If the natural hot springs are the resort’s first “secret,” then the Snowy Mountain Pub & Brewery is the second. When Dr. Janssen purchased the resort in 2008, the brewery located on the property had not been in use for several years. Janssen turned to Laramie native and experienced brewmaster, Steve Simpson, to resurrect the beermaking operation. On July 13, 2009, the Snowy Mountain Pub & Brewery reopened and is known as one of the fastest-growing breweries in Wyoming.

Simpson and his team currently brew and offer nine micro-brewed beers on tap at the bar. Five are “house beers” and four are what Simpson calls “seasonal beers.” The house beers include an Irish Red Lager, Big Nose chocolate honey rye porter, an Imperial India pale ale, Saratoga Witbier (wheat beer) and Aspen Leaf Munich Helles pilsner. For the beer connoisseur, the Snowy Mountain Pub adds yet another sumptuous attraction to the resort. Simpson says he loves to experiment, and that new beer tastes and styles are certainly always on the horizon for guests to enjoy.

With its colorful Western heritage and its unbelievably beautiful location, the Saratoga Resort & Spa lives up to its slogan: