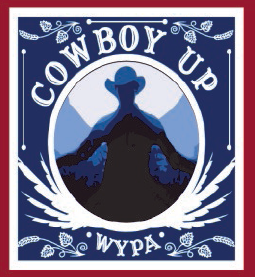 All 13 Wyoming Microbreweries collaborated to make the first 100% state wide collaboration brew ever done in the Nation! Snowy Mountain Brew Master Steve Simpson came up with the idea during the 2011 Steinley Cup Microbrew Competition in Saratoga.

“At the time there were 11 active breweries and 10 showed up for the festival. I pitched the idea and all wanted part in it.” Simpson said. He was then able to get all 13 on board for their first initial meeting on January 12, 2012.

It was decided that they would all meet to brew in Pinedale, Wyoming at the Wind River Brewery on April 21st. Brewers brought their own hops to contribute in the brew from their respective brewery. Each brewery received 2 kegs of the WYPA by Monday, May 14th in time for Craft Beer Week (May 14th-20th). The remaining kegs of WYPA will be saved for the 2012 Steinley Cup Microbrew Festival on August 18th.

Simpson says the positive outcomes to a collaboration brew like this are brewer’s getting together and showing unity, each local brewery getting their own press on Craft Beer Week, and the proceeds from WYPA sales will be going to a local charity.