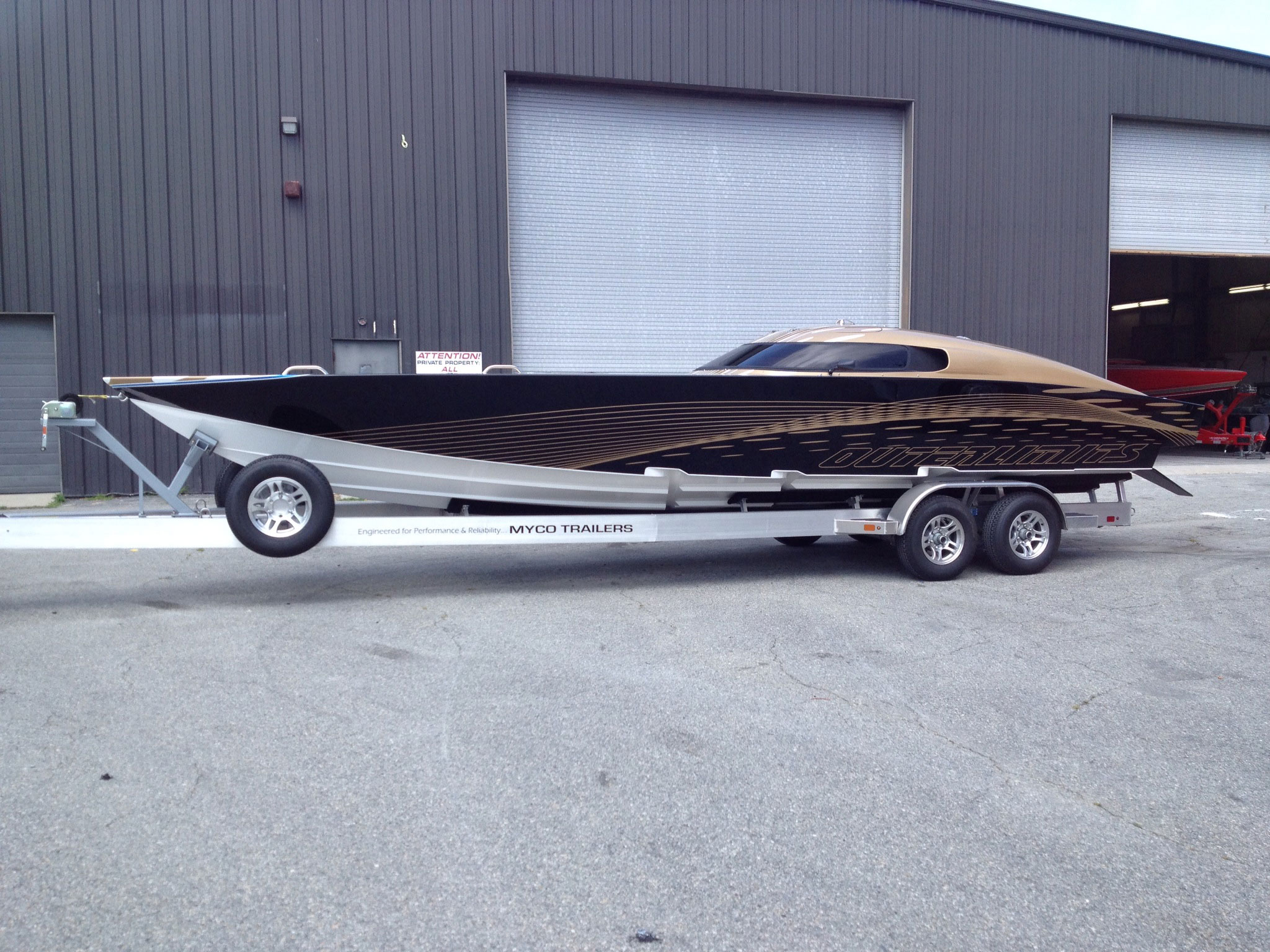 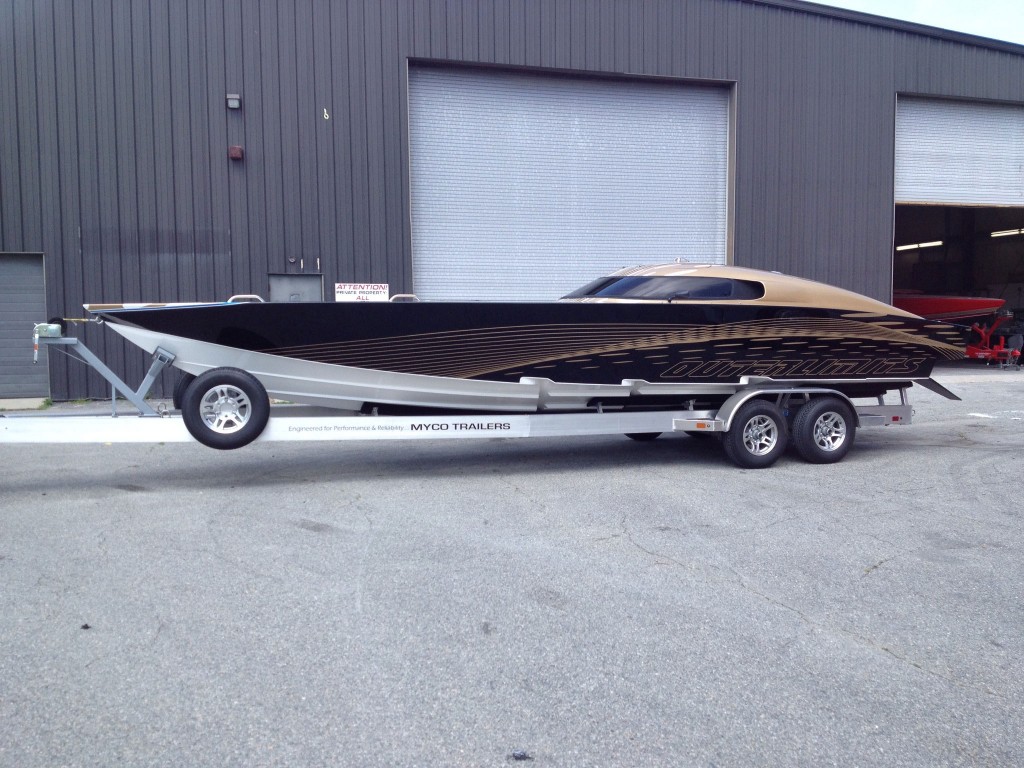 the new Outerlimits SV29 stepped V-bottom, Snowy Mountain Brewery, a Super V Light-class offshore raceboat, was unveiled yesterday at the Lake of the Ozarks Shootout Street Fair. The all-carbon-fiber-and-epoxy 29-footer is owned by Michael “Doc” Janseen, a world-renowned spinal surgeon and well-known offshore racer who also owns Watch Your Back, a 30-foot Fountain he campaigned during the 2011 and 2010 seasons in the SVL class.

This Outerlimits SV29 offshore raceboat for the Super V Light class was unveiled yesterday at the Lake of the Ozarks Shootout Street Party.

(To view a video of the new Outerlimits SV29 Snowy Mountain Brewery during its first sea trial, click here)

“Two years ago with the Fountain, we raised the bar in Super V Light,” said Janssen in a telephone interview a few hours before the debut. “It was the first new technology that had been introduced in the class in years. I like to say that it took us 30 days to build the boat, and eight months to dial it in, and last year we won the Super Boat International Nationals in Clearwater (Fla.) and Worlds in Key West.

“This year, we didn’t race but I watched what Mike Fiore at Outerlimits did with the SV29,” he continued. “I was amazed. That really was the boat of the year—it turned heads. I said, ‘Let’s build a raceboat just like it.’ So we spent eight months building a boat with Outerlimits, and I think it has raised the bar again with what we can do with technology. The fit and finish is like a Ferrari.”

According to Fiore, the owner and founder of Outerlimits in Bristol, R.I., he and his crew built the 29-footer’s canopy to Union Internationale Motonautique Class I standards. “That’s the latest spec out there,” said Fiore. “We’ve been working on it since March. We expect it to run in the mid-90-mph range.” 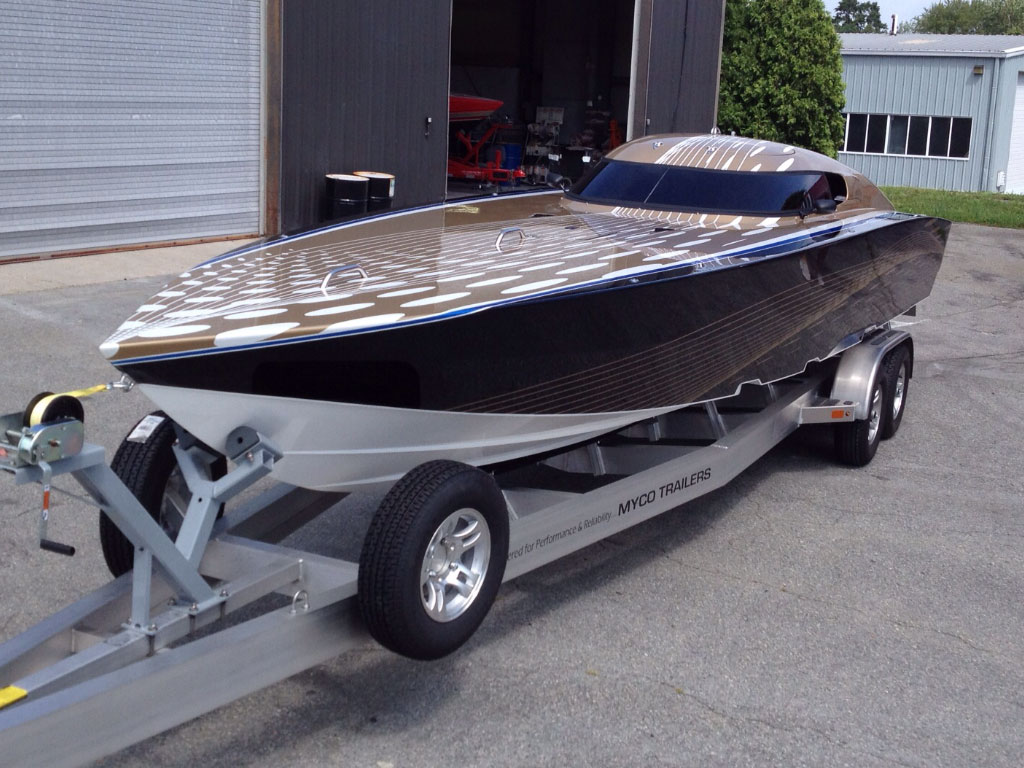 Fiore and Janssen described the new raceboat as “light,” though neither would provide a hard number for the its weight. (“We haven’t actually put it on a scale, but we have an idea of how much it weighs,” said Janssen.) Both said the boat will be below the weight limits for the class, which means Janssen and his throttleman will have to add ballast to the 29-footer for it to be legal in Super V Light.

The new 29-footer was rigged by Brian Forehand at Marker 17 Marine.

“It’s dramatically lighter than anything we’ve ever built, but we can move the weight where we want it for the best performance,” said Janssen.

But will it be faster than the Janssen’s SVL Fountain? Spectators at the Lake of the Ozarks Shootout will get their answer—or at least a partial though early answer—on Saturday when the Outerlimits and the Fountain square off in two side-by-side drag races on the Shootout course. Janssen said they plan to race the two boats again on Sunday.

“Our plans is to finish up the offshore racing season at the SBI races in Clearwater and Key West in the Outerlimits,” he continued. “Who knows? We might run both boats as one team in Key West. We have enough people to do that.”

As for his future plans for the Fountain now that he has a newer and likely faster Outerlimits, Janssen said he wasn’t sure. The boat has significant sentimental value to him.

“At the end of the season last year, two people wanted to buy it and I was going to sell it,” Janssen said. “But my family doesn’t want me to sell it. My son and daughter have been doing poker runs in it this summer. I am not ready to part with it just yet.