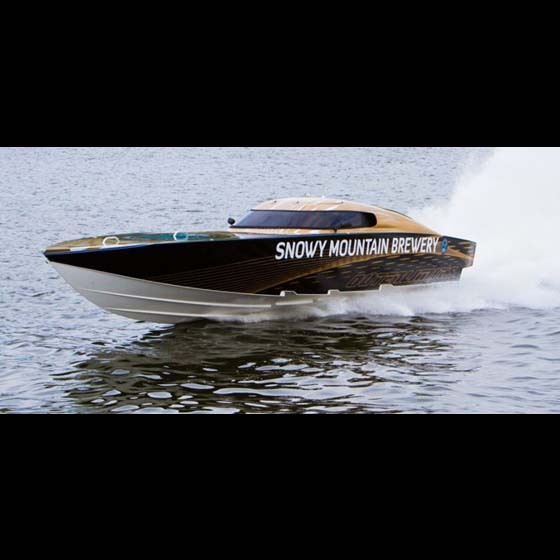 This week, Boats.com featured an article showcasing the all–new Snowy Mountain Brewery Super Vee and its potential to sweep the field in Key West! A portion of the article may be found below, while the full article can be found here.

Scheduled this year for Nov. 4-11, the Super Boat International Key West Offshore World Championships are to offshore racing what the Indianapolis 500 is to open-wheel automobile racing. It’s a benchmark event that draws racers and fans from not just around the country, but from all over the world.

The Key West Worlds use a three-race format to determine the winners in the organization’s many—some say too many—classes. Races happen Wednesday, Friday, and Sunday. There are two races into which the fleet is divided by classes each day. Teams earn points for their finishing order at each race, and the team with most points after the racing concludes on Sunday wins. In the event of a tie between teams — and that’s happened more than once over the years — the lap times determine the winners.

Super Vee Limited: Just a few years ago, the single-engine (Mercury Racing 525 EFI) Super Vee Limited class—also known as Super V Light under the Offshore Powerboat Association Sanctioning Umbrella—was the up-and-coming class to watch. Internal politics set it back, but for fans looking for a healthy field of V-bottoms, Super Vee Limited is the most likely to provide a four- to six-boat fleet and deck-to-deck racing. The boat to watch this year is Snowy Mountain Brewery, a new 29-foot Outerlimits that reportedly led “wire to wire” the SBI Nationals in Clearwater, Fla., the final race before the Key West Worlds.