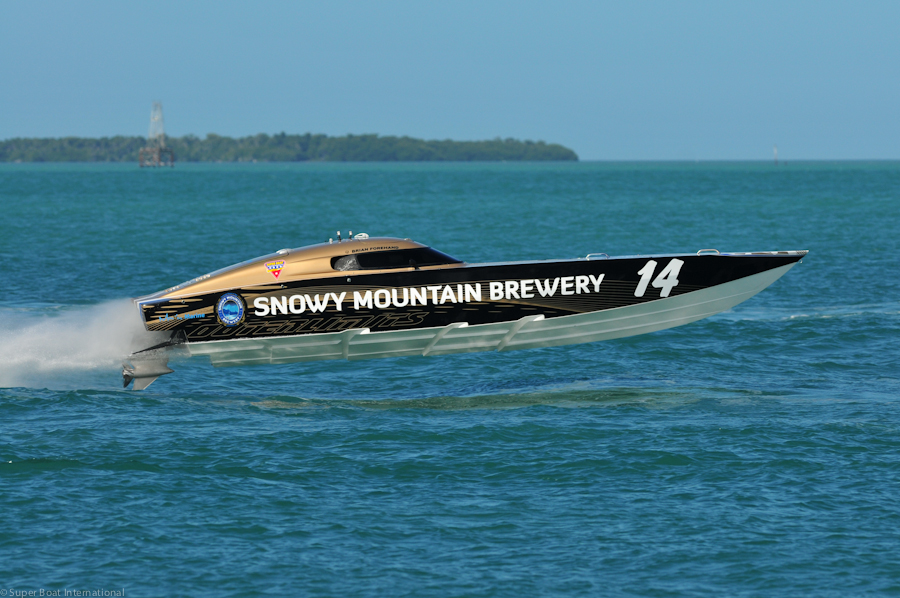 The first day of racing, throttleman Brian Forehand and owner Michael “Doc” Janssen’s daughter, Madison, navigated the boat to a first place win, averaging a speed of 75.50 MPH! The second and third race days were no different, as not another boat could sneak past the SMB team, and they averaged a speed as high as 80.49 MPH to win both races! Scooping up 1000 points and having an overall average speed 1.35 MPH faster than anyone else in the class, 74.21 MPH to be exact, the #14 Snowy Mountain Brewery Team walked away with a World Championship Title!

Here’s a portion of just one of the articles covering this astounding performance by the SMB team, featured by Speed On The Water:

With Brian Forehand driving and throttling and owner Michael “Doc” Janssen’s daughter Madison navigating, Snowy Mountain Brewery got off to a great start and never let up besting five other boats in the Superboat Vee Limited class, including Janssen’s Watch Your Back Fountain.

“It’s been real fun to run two boats as a team,” said Janssen, a spinal surgeon from Colorado who took delivery of the 29-foot carbon-fiber Outerlimits in August. “We weren’t sure if we were going to run the boats in different classes this week, but we opted to run both boats and it’s worked out great.

“The conditions today were much more predictable than Wednesday,” he continued. “Because we raced Wednesday and did a lot of practice on Thursday, we did really well out there today.

Click here to view the full article by speedonthewater.com!