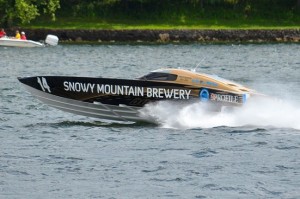 While the Offshore Powerboat Association (OPA) is based out of the New Jersey with many of the races based in that Tri-State are of our country, it has reached as far south as Florida and as west as Mississippi. This past weekend another milestone was reached, OPA produced its first National race west of the Mississippi River in the beautiful state of Missouri in Lake Ozark. Many teams made the trek west and met up in the Midwest with a few more teams that are based around LOTO (Lake of the Ozarks) area to put on a the great show that the “Lake Race” promoters had hoped to bring to the region. The OPA teams got a treat as they were able to race on both Saturday and Sunday while normal National races are reserved for just Sunday.

The race that was the Crown Jewel of the weekend was the “Run What You Brung” class…This class didn’t leave anything on the table and proved that size and horsepower doesn’t matter.

The weekend started off with a gathering Thursday evening with a bag pipe duet of “Amazing Grace” in tribute to Bob Morgan and JT Tillman, local racers that lost their lives tragically while racing in 2011. On Friday, a street party was hosted at Bagnell Dam allowing the locals as well as the weekenders from all over the Midwest get up close and personal with the racers as well as the incredible machinery they would navigate over the weekend. Saturday morning, dark clouds formed over the area bringing rain and put a damper into the teams preparations, however by noon (the scheduled start of the racing) everything cleared it and the races went off without a hitch. The Super Stock class featured Gary Ballough, who is not only a multiple National Champion, but also showcases his talents abroad around the world. He was joined by 18 year old driver, Taylor Chastelet, in their St. Louis Motorcars machine. Even though they almost miscalculated one of the course markers, they were able to make the mark, St Louis Motorsport was able to gain back their lead and take 1st. St Louis Motorscars was the overall winner. Class 2 showcased local teams with HP Mafia taking the overall win. Class 3, Class 4, & Super Cat resulted with 2nd Amendment, Simmons Marine, and Cleveland Construction winning respectively. Class 5 allowed Cisco to flex their muscles and show their dominance once again taking the checkered after a flag to flag dominance. Country Service took Class 6 honors as well as Tug It in SVL. The race that was the Crown Jewel of the weekend was the “Run What You Brung” class that allows any canopied boat 30’+ to go out and compete. This class featured the likes of Miss GEICO, CMS, Cleveland Construction, Snowy Mountain Brewery, Racing for Cancer, and Cat Can Do. This class didn’t leave anything on the table and proved that size and horsepower doesn’t matter. On Saturday, Miss GEICO and CMS put on a show for the ages, however a missed buoy for CMS and a mechanical failure from Miss GEICO moved them to the back of the field giving Cat Can Do the day’s victory. Sunday was not a letdown as CMS led from start to finish giving Cat Can Do the overall win as well as the BIG check. ​A great weekend was had by all and OPA is most definitely looking forward to a return to this pristine area of our country!!!

See photos and the full story that features our Snowy Mountain Brewery in the Offshore Powerboat Association’s “OPA Goes West“.