Drink Denver published an AWESOME review of the Snowy Mountain Brewery, located here at the Saratoga Resort and Spa! Check out what they had to say below.

Just west of the Snowy Range Mountains in south-central Wyoming the snows of winter melt into the tributaries of the North Platte River. The river itself snakes its way down to a plateau and through the tiny town of Saratoga. It is here that this cool rushing water gets turned into many different flavors of liquid refreshment, all of it in the form of beer.

Snowy Mountain Brewery is located at the Saratoga Resort and Spa, a resort that has more than 100 years of history and contains a series of natural hot springs that have been providing healing soaks for centuries. Founded in 1995, Snowy Mountain Brewery is the third oldest brewery in Wyoming. So the suds have a bit of history too. However, it wasn’t until master brewer Steve Simpson was hired in 2009 that the brewery made a name for itself.

Steve Simpson began home brewing decades ago, long before it had the cachet it does now. He brewed for friends. It made his friends happy, he said, especially since they didn’t have to pay for it. Then he and another gentleman opened up The Library Sports Grille & Brewery in Laramie near the University of Wyoming campus. The Library is Wyoming’s second oldest brewery. (Snake River Brewing in Jackson is the oldest for those keeping track.) Unfortunately, Simpson’s friends lost out. 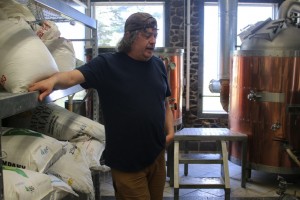 “They had to start paying for their beer,” he chuckles.

As things grow and change, The Library grew and changed. (The brewery ended up having to move to a new location in 2013) Things also changed in Saratoga when Dr. Michael Janssen of Denver purchased Saratoga Resort in 2008. The brewery had been closed for a few years. Dr. Janssen wanted to reopen it and hired Simpson, who still lives in Laramie and commutes to the brewery on weekends. For the next year things were peaceful in the valley until a strange visitor came for a stay. Unbeknownst to anyone at the resort, a journalist for Draft Magazine stayed for a few days and drank his way through the brewery’s selection beers. He then asked for a growler to take back with him. A few months later an article appeared in a 2010 Draft Magazine. A cover article. The resort was listed as the one of magazine’s six best places to stay with a brew pub.

“I knew things were gonna change then,” said Simpson. He and Dr. Janssen immediately ordered more equipment and things have been humming along ever since. Now people from all over world come to tiny little Saratoga (Population 1,600) not just to soak in the waters, but to taste the highly regarded brews.

Simpson uses a five-barrel system to produce six regular beers and three to four seasonals. The taps in the bar are connected directly to the service tanks so this is also some of the freshest beer around. His go-to beers are some of the resort’s most popular. The Saratoga Witbier is Belgian-style wheat with German Tettnanger hops. The Indian Pale Ale is a full-bodied IPA lightly hopped to bring out the rye in it. The Lone Ranger Red is more malty with a slightly fruity taste. The High Altitude Helles is a pilsner also made with German Tettnanger hops. The Sunshine Ale is a light blonde with a hint of honey and the Chocolate Meltdown Porter has a balanced blend of hops and malt. Our favorites are the Porter because of its chocolate and coffee taste without the burnt aftertaste while the Helles is flowery and malty without the bitterness. 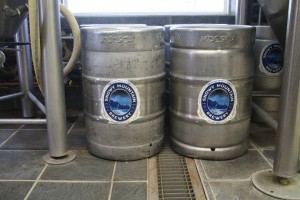 Simpson likes to have fun and experiment with his rotating brews. Seasonal brews currently on tap include the Honey Badger made with 15 pounds of Wyoming honey, which tastes divine, and the Dirty Blonde with a berry/cherry scent and sweet taste. At the time of Drink Denver’s visit there was a collaboration brew called Steamboat, which was named for a famous Wyoming horse. It’s these experimental and collaboration brews that make every visit to Saratoga unique.

For Simpson, who still has a day job in Laramie, you would think driving back and forth to the brewery would get taxing, but he loves it.

“Brewing is relaxing for me. Not like working at all. This is my downtime,” he says. He also adds that the fishing in these parts is a fantastic bonus. 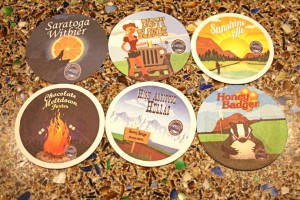 For us the hot springs are relaxing. The resort has a large open rectangular pool that hovers around 100 degrees and four smaller, hotter springs covered by teepees that are first come first serve. The resort has a relaxing day spa, restaurant, nine-hole golf course and ATV rentals. No excuse for being bored here.

On Saturday, August 16, the Snowy Mountain Brewery and the town will host the 19th annual Steinley Cup Microbrew Festival and Competition, the state’s largest brew festival bringing together almost every brewery in the state. The festival runs from 1 to 5 PM and includes a chili cookoff and entertainment. Entry fee is $20 per person and includes tasting mug and ballots to vote for the best beers the state has to offer.

Saratoga, WY is only four hours away from Denver via I-25 to I-80 or take the scenic route, WY State Highway 130 through Libby Pass and the Snowy Mountain Range. The pass is only open from Memorial Day to Labor Day. The resort and brewery are located at 601 E. Pic Pike Road. Call toll free 1-800-594-0178. Cheers!

This article originally posted on TheDrinkNation.com