Coming Up Next… the 2nd Annual Snowy Mountain Brewery Beerfest! 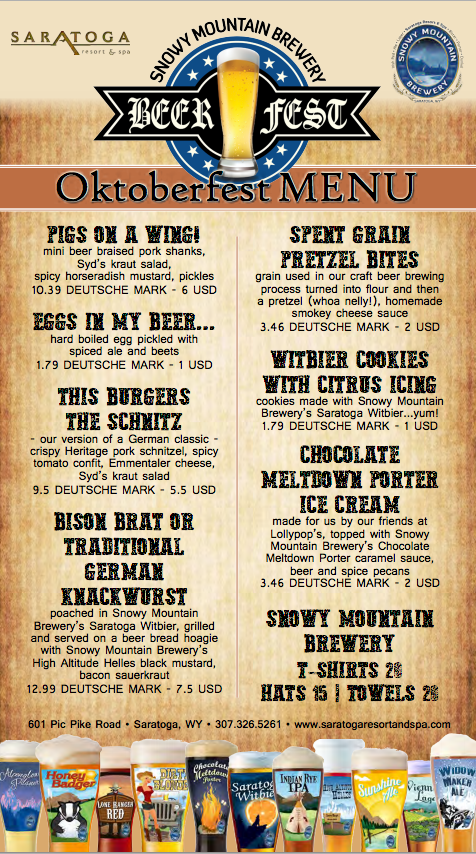 The air is crisp and Fall is finally here, so come out for our 2nd Annual Snowy Mountain Brewery Beerfest in beautiful Saratoga, Wyoming. Celebrate with us and enjoy our Oktoberfest menu, chocked full of German–inspired cuisine, available throughout the event on Saturday, October 3rd, 2015!

The Saratoga Resort and Spa and in-house Snowy Mountain Brewery is featuring a delectable Oktoberfest menu, offering Fall gourmet delicacies. Some tasty menu items include our very own Pigs on a Wing, Eggs in My Beer, Bison Brat or Traditional German Knackwurst, and lots more. Snowy Mountain Brewery’s apparel will also be available, though for a limited time only!

Snag your own Snowy Mountain Brewery T-Shirt for only $20, hats for $15, and towels for $20. Additionally, make sure to stick around for the awards ceremony, as there will be prizes for 1st, 2nd, and 3rd place winners and People’s Choice in the brewing competitions! You don’t want to miss this!

Ryan Thomas is a frequent judge and organizer of national and international professional and amateur competitions. He is the regional director of the Beer Judge Certification Program, and holds the rank of Grand Master II. Ryan has been an amateur brewer for 20 years and many of his recipes have been brewed commercially in Colorado, where he claims the front range as his home.

Bob Hall has brewed beer for the past 26 years and won a few national and regional awards for it.  He has judged beer at homebrew and commercial competitions for the past 23 years and holds the rank of BJCP Grand Master. He brews and enjoys nearly anything but is currently infatuated with Czech lagers, Belgian Saisons and anything with fruity hops.  During the week he teaches biology at the University of Wyoming.

Richard Mincer is a frequent judge of homebrew competitions, and judges professional entries at the Wyoming Brewers Festival. He has held the rank of BJCP National Judge since 2006. Richard has been involved in amateur brewing for approximately 25 years, has organized homebrew competitions, and has had the good fortune to brew a couple of his Best of Show beers on commercial systems.

This year’s event has already surpassed the first annual Beerfest in registration and attendance expectations, and Saratoga Resort and Spa only has limited availability left! Here are some other great places to stay in and near Saratoga, Wyoming: 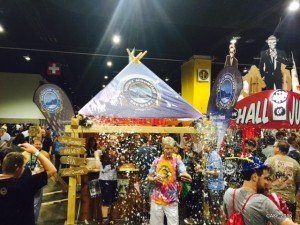 Snow Is In the Air…

This weekend, the Snowy Mountain Brewery team is in Denver, Colorado at the Great American Beer Festival! With the first official day of the event underway, we’ve received great feedback from all beer enthusiasts who have stopped by our booth, for both our delicious home-brews, and for bringing some flurries from the Snowy Range with us! Check out the gallery below for a taste of the action that’s taking place!