Join Us at the 2nd Annual Snowy Mountain Brewery Beerfest in Saratoga, WY! 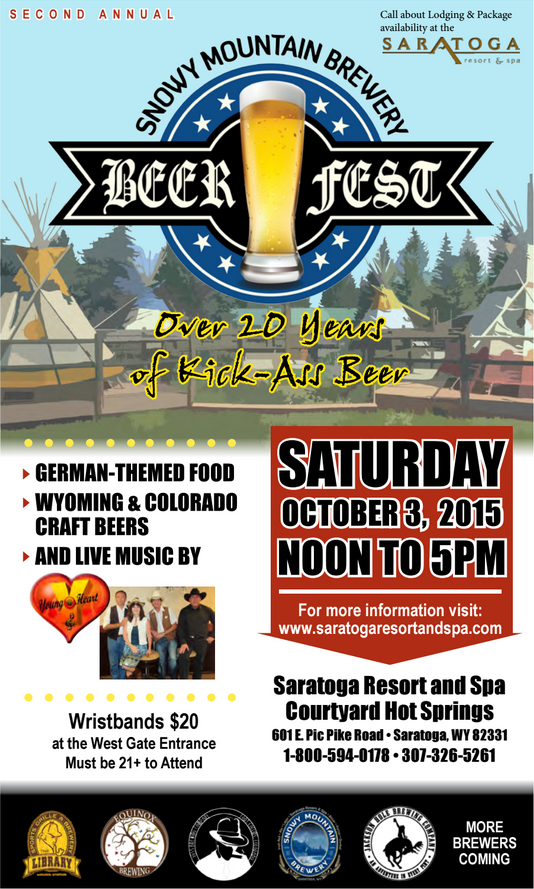 Join us for our second annual Snowy Mountain Brewery Beerfest in beautiful Saratoga, Wyoming. Stay with us for an extraordinary day of craft beer sampling, entertainment, and German-themed food on Saturday October 3rd, 2015!

Being the third oldest active brewery in the state of Wyoming, Snowy Mountain Brewery is proud of the its legacy of 20+ years of Kick–Ass Beer. Since our founding on January 1st of 1995, as the Sierra Madre Brewery, we’ve strived to put not only tradition into our beers, but to give each brew its own unique signature flavor and a distinction that surpasses any other microbrewery.

The Saratoga Resort and Spa and in-house Snowy Mountain Brewery will host an additional 4+ breweries, traveling from all over Wyoming and Northern Colorado, for the event, including The Library Brewery, Equinox Brewing Company, Jackson Hole Brewing Company, and 1933 Brewing Company. Additionally, there will be a bounty of German-themed food available in the courtyard, and entertainment provided by Young@Heart!

Wristbands to the event are only $20, and will be available at the West Gate Entrance. MUST BE 21+ TO ATTEND.

As available rooms are quickly filling up, additional lodging may be found at one of the following local lodges.

Couldn’t have been better… loved the Micro Brews and the food was very good! Can’t wait to go back!
— Lorrain J.

I found the hot springs resort on a Groupon offering. Snowy Mountain Brewery is on the premises. We didn’t know what to expect, but I am thoroughly satisfied. My boyfriend ordered their sausage of day… Bison. It’s homemade, served with a sprinkling of marinated veggie slices and stone ground mustard. Delicious. We then opted for the honey lemon thyme chicken wings – they were so delicious. Perfect crispy (light) coating served over a scoop of potato salad, which was creamy and satisfying. I love being surprised like this!
— Laurie M.

Snowy Mountain Brewery is run by a brew master that came from Laramie, WY. The brewery is located in the Saratoga Inn which has gone through various changes over the years but I was very excited to see that a microbrewery landed into town. I got the taster set which was pretty good. My favorite was the light wheat ale which seemed to have a hint of raisin in the taste. Because of this it upped the ante on the unique scale. I am originally from Saratoga, and while I don’t make it a priority to go home very often, it is sure nice getting loaded on micro brews when I am in town.
— Alden C.

The place was beautiful and thankfully not at all pretentious. We had lunch at the pub with the brew room visible behind the bar. The beer… it was fabulous! We both started out with the Honey Badger Ale. After that Mr. G. had a High Altitude Hellas, not bad, and I had the Chocolate Meltdown Porter, deee-lish! Dessert in a mug folks. The Saratoga Resort and Spa was voted one if the top ten beer American Luxury Beer Vacations by CNN Travel, and it’s easy to see why. Everything from the service and ambiance to the food and brew was fabulous.

The Saratoga Resort & Spa and Snowy Mountain Brewery was the perfect combination of luxury lodge and playful pub.