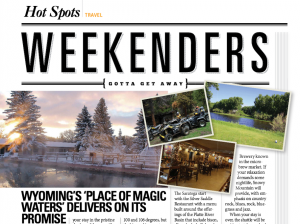 Saratoga Resort and Spa was featured in the Fall 2015 edition of POPA Magazine on Pg. 50! Check out what they had to say about our Saratoga Safe-Haven, below!

Sometimes you just need to settle in and relax, and Wyoming, America’s least populated state, is just the ticket. The Saratoga Spa and Resort in the Platte River Basin will provide the natural mineral hot springs, called “the place of magic waters” by the original Native American tribes of the region, as well as comfortable accommodations, entertainment and great food and drink.

Best of all, you can fly into nearby Shively Field (KSAA) and call for a free shuttle to bring you back to The Saratoga for your stay in the pristine shadow of the maginificent Snowy Range and Sierra Madre Mountains. You can spend your days backpacking in the Platte River Wilderness, white water rafting, fly fishing, kayaking, bicycling, canoeing, boating, swimming and fishing but in the end it’s the hot springs that will bring you back.

The Saratoga has created intimate teepee covered pools as well as a 70-foot swimming pool filled with the “waters,” which feature particularly high mineral content and almost none of the typical sulfur smell of hot springs. The water temperature in the small pools hovers between 100 and 106 degrees, but the big pool is more temperate. The hot spring gurgles up through the native rock in the resort’s backyard. Toss in the luxury of treatments at the Healing Waters Spa, and your relaxation will be complete.

The Saratoga Resort and Spa, an inn built in the 1950’s that still has a middle-of-the-last-century ambiance, takes full advantage of the area’s geothermal goings-on. Each of the 50 guest rooms and suites is outfitted with featherbeds, Pendleton blankets, locally crafted lodge pole beds and Western prints by Charles Russell and Frederick Remington.

Dining options at The Saratoga start with the Silver Saddle Restaurant with a menu built around the offerings of the Platte River Basin that include bison, elk and whole Colorado striped bass. Many of the entrees are paired with beers from the Snowy Mountain Brewery, the resort’s anchor brewpub.

The microbrewery boasts eight to ten different flavors with names such as High Altitude Hellas, Lone Ranger Red, Chocolate Porter Meltdown and Honey Badger. The brew master, Steve Simpson, was an avid home–brewer for 10 years until he turned his hobby professional in 2008 at the Library Brewery in Laramie. His years of experience and “taste tests” have helped make the Snowy Mountain Brewery known in the microbrew market. If your relaxation demands some nightlife, Snowy Mountain will provide, with emphasis on country rock, blues, rock, bluegrass and jazz.

When your stay is over, the shuttle will be waiting to take you back to Shively Field and its 8,800-foot paved runway. AvGas and Jet A are available, and car rental agencies are on site if you decide you need to explore Carbon County further. But there is one caveat to flying in Wyoming. As the AOPA site warns, “Be alert! There may be antelope on the runway!

This article originally posted on PilatusOwners.org.