Check out the flashback “Postcard From the Past” from Wyoming Livestock Roundup, featuring some history on the Saratoga Resort and Spa Natural Hot Springs, below! 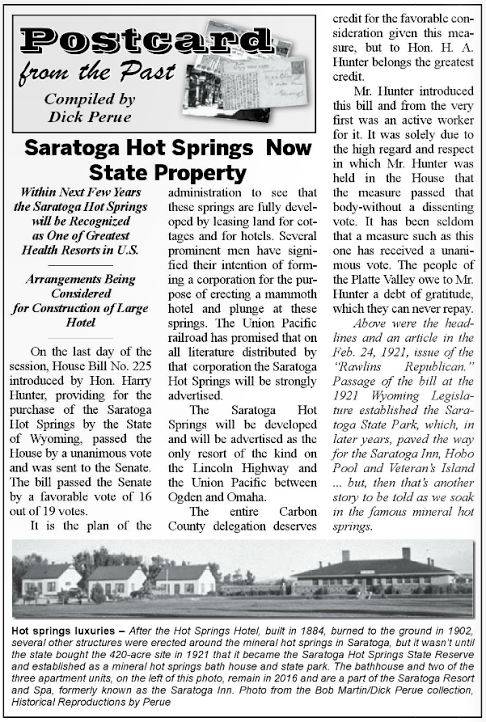 Below is an article from the February 24, 1921 issue of the Rawlins Republican, featuring the passage of the bill at the 1921 Wyoming Legislature establishing the Saratoga State Park, which in later years, paved the way for the Saratoga Inn, Hobo Pool, and Veteran’s Island… but, that’s another story to be told as we soak in the famous mineral hot springs.

Within the next few years the Saratoga Hot Springs will be recognized as one of the greatest health resorts in U.S. Arrangements being considered for construction of large hotel.

On the last day of the session, House Bill No. 225 introduced by Hon. Harry Hunter, providing for the purchase of the Saratoga Hot Springs by the State of Wyoming passed the House by unanimous vote and was sent to the Senate. The bill passed the Senate by a favorable vote of 16 out of 19 votes.

It is the plan of the administration to see that these springs are fully developed by leasing land for cottages and for hotels. Several prominent men have signified their intention of forming a corporation for the purpose of erecting a mammoth hotel and plunge at these springs. The Union Pacific railroad has promised that on all literature distributed by that corporation the Saratoga Hot Springs will be strongly advertised.

The Saratoga Hot Springs will be developed and will be advertised as the only resort of the kind on the Lincoln Highway and the Union Pacific between Ogden and Omaha. The entire Carbon County delegation deserves credit for the favorable consideration given this measure, but to Hon. H. A. Hunter belongs the greatest credit.

Mr. Hunter introduced this bill and from the very first was an active worker for it. It was solely due to the high regard and respect in which Mr. Hunter was held in the House that the measure passed that body—without a dissenting vote. It has been seldom that a measure such as this one has received a unanimous vote. The people of the Platte Valley owe to Mr. Hunter a debt of gratitude, which they can never repay.

Hot Spring Luxuries — After the Hot Springs Hotel, built in 1884, burned to the ground in 1902, several other structures were erected around the mineral hot springs in Saratoga, but it wasn’t until the state bought the 420–acre site in 1921 that it became the Saratoga Hot Springs State Reserve and established as a mineral hot springs bath house and state park. The bathhouse and two of the three apartment units, on the left of the photo (left) remain in 2016 and are part of the Saratoga Resort and Spa, formerly known as the Saratoga Inn. Photo from the Bob Martin/Dick Perue Collection, Historical Reproductions by Perue.