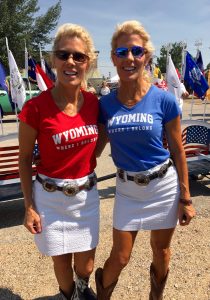 Come join us for an epic night at the Snowy Mountain Pub & Brewery to experience the duo, Annie & Amy performing LIVE on Saturday, August 6th, 2016 from 7:30 to 10:30PM. They will be introducing the song, “Wyoming Where I Belong” that they were commissioned to write for Wyoming. The song received an international music award for American Heritage, and has played on BBC Radio overseas while they were touring as recording artists with Warner Bros Records in Nashville. Annie & Amy say,

“We are so excited to bring it [the song] home to Wyoming! It was featured on PBS, and PBS even added some beautiful aerial footage to the song.”

Fifth generation Wyoming natives and identical twins Annie and Amy Smith have taken their music all over the world, singing on USO tours to Cuba, Panama, Alaska, and the Caribbean, and performing on cruise ships to Bermuda, Greece, Turkey, and Russia. Wyoming Chronicle visits with the two Wyoming entertainers.

While students at Stanford, Annie & Amy lived & studied in Vienna, Austria & performed at the Embassy for the Ambassador to Austria. The girls then moved to Newport Beach, CA. making TV pilots and doing commercial work in Los Angeles. Annie & Amy later moved to Nashville when they were signed as recording artists on Warner Bros. Records & MCA Music.

For more about Annie and Amy, check out their website!