Round the Bend Performing at Snowy Mountain Brewery 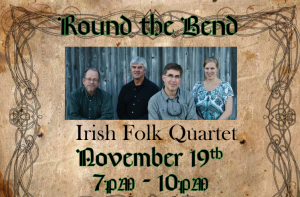 Saratoga Hot springs Resort is excited to announce Irish Folk Quartet, Round the Bend, will be performing live at Snowy Mountain Pub & Brewery on Nov. 19th from 7pm-10pm! Come join us for a fun–filled night featuring entertainment and dancing!

Round the Bend is a colorful folk quartet that combines innovative arrangements of music from Ireland, Scandinavia, and the Balkans with original compositions. These prominent musicians weave together the lively acoustic sounds of fiddle, accordion, flutes, banjo, bouzouki, guitar, and voices. Come and enjoy a resonant tapestry of textures from around the world.

Amy Lenell began playing violin at the age of 9 and has always been passionate about fiddling styles around the world. She lived in Cork, Ireland from 2007-2008 in order to learn Irish traditional fiddling, and returned to Ireland in 2013 to pursue her masters degree in ethnomusicology. Amy now teaches and performs around the Wyoming area, and regularly returns to Ireland to play and learn.

Brian Peel is in demand as an acoustic guitarist and singer-songwriter for bluegrass, roots country and western, swing, old-time fiddle, and Celtic ensembles. In addition to performing as a member of prize winning bands in the RockyGrass and Rocky Mountain Bluegrass Festivals, Brian has won several acoustic guitar competitions and is a published songwriter on the critically acclaimed CD, “New Reasons” by Bill McKay. He has recently focused on performing and composing Celtic music on guitar and bouzouki.

Carrick Eggleston has played Celtic music on accordion and fiddle since 1983, and performed with the group DunCreagan through 1991 with tours of New England and a tour in Europe. For his day job, he is a geochemist on the faculty of the University of Wyoming where he has taught and based his research since 1995. Carrick and his remarkable accordion playing and musical memory are a mainstay of the Laramie Celtic music community.

Rod Garnett blends the sounds of many different flutes and flute-like instruments with the lively sounds around him in Round the Bend performances. He toured internationally as a member of the Denver-based Celtic ensemble Colcannon for over twenty years, and has since continued to develop his passion for flutes of all kinds. Garnett is a Wyoming Governor’s Arts Award winner and has worked to develop community-based music events in Laramie and throughout Wyoming.