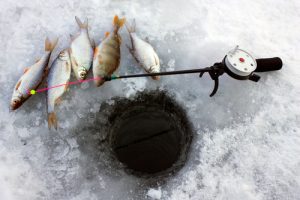 Get Hooked! The annual Saratoga Lake Ice Fishing Derby has been held at Saratoga Lake the third weekend of January every year since 1983.

Tons of fishermen are coming out to prove their skills at Saratoga Lake in Saratoga, Wyoming while competing for over $6000 in guaranteed cash prizes and up to $35,000 in additional prizes. Hourly cash awards of $100 will be awarded for the largest fish measured that hour. The big prize money is $2000 cash for First Place, $1000 cash for Second and $500 cash for Third Place.