There are four basic ingredients used to make beer. Yeast, malt, hops and WATER! Water accounts for up to 95 percent of a beer’s content. Our Snowy Mountain Brewery gets its water from; you guessed it, Saratoga! Just named 2018 Best Tasting Drinking Water Winner (story below), Saratoga officially has the best water in Wyoming to make beer. Therefore, we must make the best tasting beer in town! 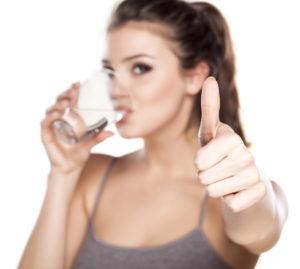 Saratoga — There’s nothing like a good glass of water to go with a boiling hot day during the summer.

Saratoga residents will be drinking what’s considered the best water of the state this year as they were named the 2018 Best Tasting Drinking Water winner in the state of Wyoming during the 27th annual Wyoming Association of Rural Water System Technical Conference and Industry Trade Show in Casper.

“The odor could range from, ‘Can you smell the different disinfection in it or does it have any kind of a smell, sulfur?’ Anything like that,” Pepper said.

“Then it moves to the clarity. According to Pepper, clarity judging is done by checking the water for traces of particles and bacteria. Pepper said finalists included Chugwater, Saratoga, Ten Sleep and the Aspen-Pines Water and Sewer District. “They have been in the finals repeatedly,” Pepper said. “I think this might have been their eighth or ninth trip to the finals, so it was kind of fun to see Saratoga win.”

Saratoga Mayor Ed Glode said the city transitioned nine years ago from using river water to using five wells east of town as a result of cleaning difficulties during the summer and the water has been good ever since. Saratoga topped 20 other registered entries…

CLICK HERE TO CONTINUE READING
This article was originally posted on WyomingBusinessReport.com.