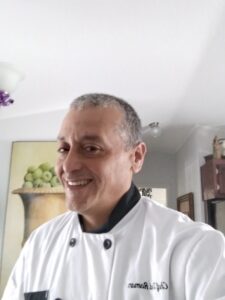 Chef Roman was born & raised in Brooklyn, New York. Chef Roman started at a very early age cooking, coming from a Mediterranean heritage where food is the primary focus & a way of communicating. He attended Johnson and Wales University for Culinary Arts in Charleston, S.C. Afterwards he would go on to work for Hilton Hotels for over 8 years at various locations including NYC, Florida, and Alabama. Achieving numerous accomplishments including becoming F&B Director for Hilton Hotels in Alabama.

Chef Roman has worked all over the country traveling with Club Corporations of America (the largest private club company in the world) where he received training and completion of his Certification as an Executive Chef! As a Certified Executive Chef, he has also competed in numerous food competitions. Winning awards such as Best Beef Entree, Best Soup and Salad, Best Dessert, & especially Iron Chef Champion for the state of Arkansas in a crueling 3-day competition with 15 other Chefs. Chef Ted loves to be creative and go above and beyond. He is animate about food from scratch and made with the proper culinary skills. He is an experienced and talented Chef with such skills as Ice Carvings, Fruit, Cheese, & Chocolate Sculptures and presentations of food that are artfully and meticulously presented.

Chef has been in the industry for over 33 years & brings all his travels and culinary experience to the resort. Chef comes with his wife Lori and granddaughter Kimmy along with their St. Bernard and Boston Terrier. Chef has 4 children : 3 Daughters, 1 Son, 2 Grandchildren. Chef Ted loves the outdoors and is a huge 4 wheeler and hiking enthusiasts and looks forward to a great opportunity and the beautiful scenery and people of Saratoga.