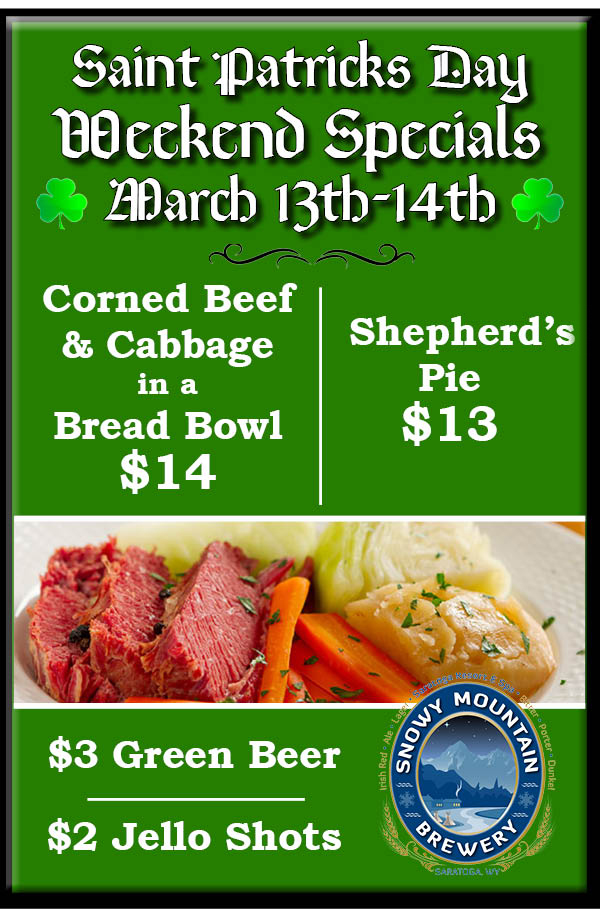 Join us at the Saratoga Resort and Spa on Friday, March 13th and Saturday, March 14th for a St. Patrick’s Day Celebration, featuring green beer, jello shots and Irish-themed food. Stay for Woodshed Red LIVE from 7pm – 10pm in the Pub both nights!

We will also be serving the same drink specials (see image on left)
on St Patrick’s Day, Tuesday March 17th.

Why Is St Patrick’s Day Celebrated With Beer And Shamrocks?

Anyone with even a cursory knowledge of St. Patrick’s Day is aware of the fact that the celebration is inexorably tied to the excessive consumption of alcoholic beverages. While some may believe that this is just another example of lively individuals taking advantage of a celebration, there is actually a solid reason why alcohol has long been a part of the holiday that is now celebrated worldwide.

While there is a justifiable reason for drinking somewhat excessively in celebration of St. Patrick, there are plenty of misconceptions that surround the history of the holiday and the man in whose honor the celebration occurs.

Who Was Saint Patrick?

Saint Patrick is considered the most recognizable of all of the patron saints of Ireland, though he was not of Irish descent himself. St. Patrick was born in Great Britain, and was first brought to Ireland as a slave after having been captured and taken from his home.

He eventually escaped from his captors, and returned home to Great Britain where he became a cleric. St. Patrick declared that it was a vision that served as the impetus for his return to Ireland, saying that the people of Ireland, as though speaking through one voice, called out to him, “We appeal to you, holy servant boy, to come and walk among us.” Of course, St. Patrick would return, bringing Christianity to the Irish people, who had been polytheistic to that point.

Perhaps the most well-known story about St. Patrick is also the most inaccurate tale about the patron saint of Ireland. According to legend, St. Patrick drove all of the snakes out of Ireland. This would have been quite a feat, except for the fact that there were no snakes in Ireland to begin with. The frigid waters that surround the emerald isle are too cold for snakes to migrate through, making it impossible that snakes could have ever existed in Ireland. The story is more likely a parable for how St. Patrick brought Christianity to Ireland while also largely eradicating paganism, which often used serpents as a symbol. By eliminating paganism, St. Patrick symbolically drove the snakes out of Ireland. 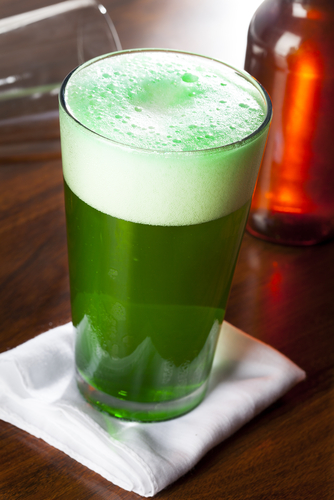 The St. Patrick’s Day tradition began as a feast day held in honor of St. Patrick on the anniversary of the day he died. Christians are allowed to put aside their Lenten restrictions on food and alcohol consumption on this day, which is why excessive drinking has become so permanently linked to the celebration.

Eventually, the feast day evolved into a greater celebration including not only St. Patrick, but also Irish culture, history, and traditions. Though the feast day began in Ireland, the first St. Patrick’s Day parade began in America. The parade tradition became exceptionally popular in the 1840s, when hundreds of thousands of Irish immigrants came to America to escape the potato famine.

The Symbol of the Shamrock

The celebration of St. Patrick’s Day involves many symbols. On March 17, revelers worldwide will wear shamrocks on their clothing as part of the celebration. The reason that the shamrock has become linked to St. Patrick is because, according to legend, he used the three leaves of the shamrock to explain the Holy Trinity to the Irish people. In order to display their Irish-Christian pride and to honor St. Patrick, Irish people began to wear a shamrock on their clothing. Eventually, this practice evolved into wearing green clothes on the holiday.

Though there are many misconceptions that surround this holiday, any tradition that celebrates the proud history of a culture is worthwhile. Yes, St. Patrick’s Day may just be an excuse for some to drink excessively on a weekday, but to others, it is an opportunity to honor a Christian missionary and the culture and tradition he helped to create.

It also provides a welcome respite from the many restrictions that many Christians place upon themselves during Lent, which is the main reason why the celebration includes an overabundance of many delicious foods and alcoholic drinks. It is also the day in which the old Irish saying rings particularly true: “There are only two kinds of people in the world, the Irish and those who wish they were.”

This article originally posted on Kegerator.com