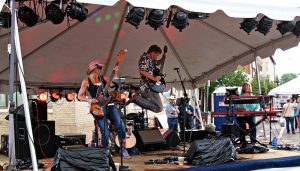 Springs Resort is excited to announce that The Flashbacks will be playing live at Snowy Mountain Brewery on January 28th, 2017 at 8pm! Come join us for a rocking night full of entertainment and beer!

The Flashbacks is a five piece rock band from Laramie, Wyoming, formed in the spring of 2013. Combined, the members of the band have over 100 years of experience performing. The band play rock n’ roll music from every decade, always trying to avoid the obvious bar staples and playing instead songs that you may have never heard before by a cover band.

Most band members play multiple instruments and everybody sings. This provides a wealth of opportunity in terms of instrumentations and harmonies, allowing the band to cover music from artists as diverse as Steely Dan, Supertramp, Bruce Springsteen, The Beatles, John Mellencamp, Fleetwood Mac, and dozens of others. The Flashbacks’ gender distribution also allows a more diverse sound that perhaps you don’t hear that often. Another important aspect of their music: every song they play has been handpicked by the different band members, and the songs go through a very strict quality control process. The passion for each song truly shows in their performances.

We hope you’ll join us for a night of rock n’ roll January 28th at our very own Snowy Mountain Brewery, as we host The Flashbacks!