There’s a new chef in town 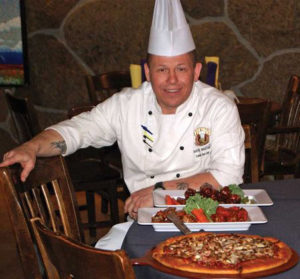 International chef Wayne Martin came to the Saratoga Hot Springs Resort two months ago and is in a love affair with Saratoga and Carbon County. Martin said he can’t wait until his family gets to join him and see the beauty and strong community that surrounds him in Saratoga.

“I love it here,” Martin said. “This is where I want to raise my daughters, because look at this community.”

He mentions the recent Saratoga Forest Management mill fire as an example of strong community atmosphere.

“Saratoga is how I see what America should be,” Martin said. “Look at the fire recently. How often do firemen go fight a fire and the community is making sure they are fed and helping them any way they can because the communities appreciate their efforts. Really, where can you go to America and find this?”

Martin has earned the title international chef, having cooked all over the world and still has a stake in a venue in the Philippines where his wife and daughters currently live. Once he gets more settled in Saratoga, his family will join him.

Martin is originally from Jackson, Mich. and said his first job was at a Bob’s Big Boy in Michigan when he was 15. At 17, after graduation, he joined the Army.

Martin said he has been a disciplined person since his days in the military. He served six years in the army. After the army he joined the marines for two years and during this time in the military he went into their culinary school.

“I went to Ft. Lee in Virginia to their culinary school and eventually taught,” Martin said.

The experience he gained in the military influences how he manages a kitchen.

“I probably learned about leadership and the responsibility a leader has to workers,” Martin said. “My feeling, when there is a problem with a worker, 90 percent of the time it is usually because leadership is lacking. To be succinct, I don’t believe in management as much as I do in leadership.”

He said there is no job in the kitchen he should not step up to if it needs to be done, whether it is being on the line or doing dishes.

“I have to lead by example, so that means there is no job I won’t do in this kitchen,” Martin said.

The past couple months he has been working at the Resort, he has been determined to bring quality with consistency to any meal he allows out of the kitchen.

“If I see something wrong, it doesn’t go out the door to the customer,” Martin said. “I instill that to staff too. We owe it to the customer for our food to always be the same in quality and taste if we serve it.”

CLICK HERE TO CONTINUE READING
This article was originally posted at SaratogaSun.com.